What do you do when presented with a fabulous challenge but no time to think? You go, go, go for it.

The inspiring?Anita Heiss sent out a world-wide challenge, via Facebook,?an invitation to write for one hour on the Monday morn just gone. The idea being for everyone to start at nine, pens down (literally) at ten. And you were free to write whatever you wanted, fiction, non-fiction, speech, blog post, journal entry, anything you chose. 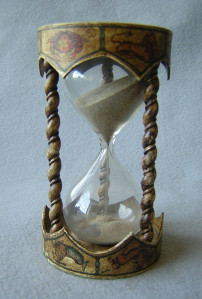 “The plan is for us all to write for an hour at the same time, UNINTERRUPTED!! Like an on-line writing group. Might be fun, might be productive, might turn out to be a waste of time creating this event.” AH.

Somehow I missed the event invite on FB, but logged in to see posts buzzing about the IWS about to start. At 8.43a.m. Monday. Yoiks!

A couple of minutes of yo-yoing between?”I’m not ready. “I’ve had no time to think what to write,” to “I’ve wanted to write?such and such scene for weeks. Could be perfect opportunity.”?Um, ah. YES. Split second decision, and barely time left?to grab a cup of tea.

Wow, did that hour go fast.?But at the end of it, I had that scene on the screen. 877 words I’d procrastinated over for yonks. Done, dusted, and I’m happy to say – a good first draft. I admit I did scurry (before starting) for my notebook and?snaffle some?lines of dialogue I’d jotted down in?the weeks prior musing on the same scene. But the thing is, the words got written.

Anita’s experiment provided the opportunity and challenge I needed to produce this scene, yet, the way it spilled out, it was just waiting to emerge.?Now I?can’t wait until the next writing sprint, and I’m hoping the whispers on FB are pointing to a regular event.

Some days we writers need a push, a challenge, reason to write. Thanks, Anita. Count me an IWS starter next time too.

(If you’re on Facebook and like the idea of the sprint, pop in and “Like” the International Writing Sprint page to hear of any upcoming events. See you at the starting line.)

I’ll see you there next Monday:)

I don’t think I’ve heard of the writing sprint Chris, but it sounds great. I’ve done BIAW (Book in a Month) and BIAW – (Book in a week) – which of course is never a whole book, but it’s a similar idea. With the BIAW, the preparation can be daunting: cook and freeze all meals, unplug phones etc so the writer focuses only on the work and only on the work. Before beginning you post the word count you want to make (to the moderator and you them post you daily total (5k, 10k, more?). The mod doesn’t let you off the hook – and so it becomes highly motivating and really gets you into the story. Great for those writing longer works.

But all that said, I think anything that motivates you and keeps you on target is really stimulating and should be encouraged. And ir forms great writing habits. Congrat on your word count – pretty good for an hour! And good luck next week!

Thanks, Kerri. It’s all about encouragement and inspiration. I’m usually very good at keeping self-motivated but any extra bursts of enthusiasm or a challenge such as the sprint are most welcome. Loved Month of Poetry for the same reason.

BIAM sounds amazing, BIAW, my mind boggles at such a challenge. Good on you. 🙂 🙂 Chris

I am enjoying the sprints too, I told someone who rang me to ring back later as I was on it, and also it stops me just getting up and doing other stuff, before I do what I love most writing!!

Great to see you here, June. Glad you’re enjoying the sprints too. They’re a perfect excuse to ignore the phone, the doorbell and other calls on our attention. Chris