I’ve recently read two marvellous though very different books.  Both shortlisted for the Miles Franklin Award, one in 2010 The Book of Emmett by Deborah Forster, and the second a current contender Bereft by Chris Womersley.

Almost all of my reading over the past three years has focused on either non-fiction research into era, settings, lifestyle, history; and/or fiction written either during or about the era of my current work-in-progress. Lately I’ve moved on to works that inform on other aspects addressed in my novel to see how authors accomplish tension, pacing and balance in their works. I feel secure in doing so now that my style, voice and story are firmly set and complete. 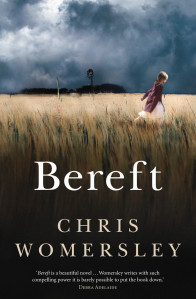 Bereft is Chris Womersley’s fictional account of a ww1 soldier’s post-war return to Australia. Returning to the shattering family murder and subsequent accusation he ran away from years before the war. All the old misbeliefs, biases and issues still exist as if not a day has passed, when into the man’s path steps a young, fanciful girl giving the young soldier a chance for redemption in saving her as he could not save his sister.

Womersley’s beautifully wrought prose weaves through the era and transported me to the harsh bleakness of the times.

An amazing telling. (And by that I mean showing in the best sense.) 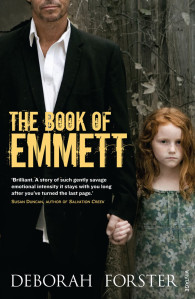 Deborah Forster’s The Book of Emmett, set half a century later, is a grab-you-by-the-throat page turner with unrelenting tension gripping from page one until I was begging for release. If I’d not been reading as a writer to see how Forster has so brilliantly achieved this breath-taking effect, I think I’d have had to put the book aside. Just in time, the pace and setting shifted to allow me to catch my breath.

TBOE is a vivid, heartbreaking look at domestic violence in the suburbs; realistic and chilling, and made worse because you well believe it’s authenticity and can imagine it still many families truth.

I recommend both unreservedly.

My reading makes me ponder a point I’ve troubled over. During various course and workshops I’ve participated in, I’ve heard the occasional writer comment that they don’t read while they’re writing, or don’t read in the genre they’re writing. Most state that to do so might overly influence them or that they fear they might subconsciously plagiarise something in the book they’re reading.

It is an interesting point. One I’ve not worried about because, firstly, I have to read, and, secondly, during the initial drafts of my WIP, my reading tended towards non-fiction and the research needed for my novel.

I only really began to immerse myself in fiction written in or about the era once my initial story was complete. I did this deliberately more because my main character and novel has a unique voice and one I wanted nothing to influence or disturb until it was fully established. It’s the voice and accent running through my head when I’m writing. It’s the voice I’m painstakingly aware of as I redraft now in fear I’ll mess it up or risk editing it out.

Last night, as I read the final chapters of my latest novel choice, I nearly dropped the book to read of a character doing something identical to one of my characters. A common enough way of the times to try to dislodge an unwanted pregnancy, but I was so disappointed to see someone else had used it. I learned of it through an older person telling of a girlhood friend. Do I take it out because I’ve now read it in another book? No. It’s a tiny reference in my story, plus I wrote it two years before I read this book. Most importantly, it’s written in a very different way from my fellow writer’s story.

Getting back to reading. I still follow the three rules, I was taught for good writing:

So fellow writers, do you read in the genre, era, area you write in? If yes, why? If no, why not? I’d love you to leave a comment and share the benefits or pitfalls as you see them.

Great post, Chris.
I’ll def. look up those books.
I was interested to read that you read novels, while you’re writing yours. (How’s it going, by the way) Sounds as if you immerse yourself totally.

I tend to read biographies of literary figures when I’m writing fiction.
Whether it’s because it’s leaving my fiction brain to mull, encouragement or just because I love a biography and reading about real people instead of my imaginary people, I’m not sure.

Glad you’re not worrying about reading something similar to what you have in your book. It would be written with your words and style anyway, and I really do think there does seem to be a universal consciousness where people seem to pick up on similar ideas at the same time.

I was well into draft two before I got back into fiction reading. I figured by then my story and voice were set, which they were and the characters too. I don’t think by that stage the fiction reading influenced me. But I know a couple of writers personally who’ve found reading fiction completely threw them off course as their style switched to emulate one they admired, so I was aware of the danger.

My novel is going great. In final editing stages now. Very positive feedback through Masters program and crit buddies, so I’m getting closer. Taking it slowly to ensure it’s cooked properly though before sending it into the world.

Great advice Chris. I think we all have to go with what works for us. There will always be someone out there writing similar things to what we are, but it’s the ‘way’ we write which is the difference.

I think so too. It’s that point of difference, unique voice or spin that stands out.
🙂 Chris

Great post, Chris.
Interesting what writers choose to read when they’re writing a novel. Something in the same genre, or something completely different?
Thanks too for the reviews on those two books. Good luck on your manuscript :))

Thanks for your comment and good wishes. Hope your manuscript is progressing well too. 🙂

Excellent post, Chris. So very well written. Since I don’t write novels, I can only comment on my experience with picture books (read heaps for enjoyment and to be inspired) and my verse novel. The verse novel was a new genre, but I read one and loved it, so wanted to read more… and then wanted to write one. I read widely to get in the voice of clipped images/phrases. So I could envisage how I might craft mine. To have a start point so I could make it my own. And again, as a kick-start when I was bogged down. But my verse novel is nothing like those that I’ve read. Reading is inspiring on many levels.

Good to hear opinion from the picture book viewpoint. Reading certainly inspires me too. It always charges me up to want to write better and in a way that will transport and make my readers tingle too.

I could no more imagine not reading than I could not breathing. Thanks for the suggestions of those books. I’ve just finished Lovesong by Alex Miller which is short listed for the NSW Premiers Award. Well worth a read. I think the main thing when writing is not to read too many of the one author If you read widely you are not likely to be influenced by the style of one author or voice. I write contemporary novels about relationships.That’s what Streets on a Map, my latest book is. That’s the type of books I like to read too.

Thanks, Dale, for your excellent advice re: reading widely to avoid influence and for suggestion of “Lovesong”. I’ve been meaning to read it for months, and it’s always better to have a positive personal recommendation.

Also I’m keen to read your “Streets on a Map” soon. Lots on list and pile teetering in my office waiting on me finishing my WIP.