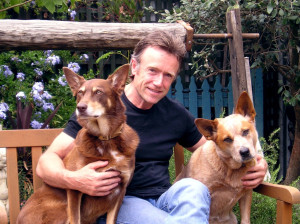 To celebrate the release of his latest sci-fi YA novel, and new series, The Maximus Black Files – Mole Hunt, award winning author Paul Collins will be visiting me at From Hook to Book as my very first guest blogger.

As a taster, and because I’m too excited to wait, I asked Paul a few questions about his exciting new series and writing process.

Q: Mole Hunt has been reviewed as having a pace frantic enough to give Matthew Reilly nosebleeds. How do you go about achieving that type of pace and maintaining it over 365 pages? Does the pace change?

A: I grew up reading Marvel Group comics such as The Hulk, Captain America and Spiderman. So my work is often referred to as “visual” and fast-paced”. I suspect those who teach writing will say there are peaks and troughs, that writers should have arcs, etc. I’m not so sure. It’s all an instinctive process to me — obviously I’ve never studied writing. I think planning your writing must be hard. There are slower moments in Mole Hunt, but they’re few and far between!

Q: Can you give budding sci-fi writers your three top tips for creating an effective and memorable dystopian world? What sets Maximus Black’s world apart?

A: Dystopian fiction is by its very nature rather bleak. It doesn’t show a bright future. Think Bladerunner, for example. One can easily see poverty everywhere, and life not being worth more than a bottle of Earth water. I doubt there are three specific tips, but more a compilation of must-haves. One of the latter is surely to set the book in the future after some apocalyptic-style event, such as the collapse of order, or as in the case with my SF book, The Earthborn, after some major war that knocks out most technology. Roaming bands of bad guys are always good fodder for dystopian fiction. 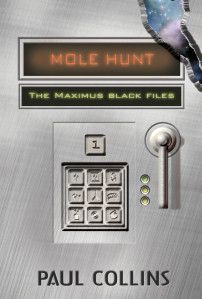 Q:How many files, I mean, books can we look forward to in the series? And for avid readers, how soon can they get excited to buy the next one?

A: I wrote all three books over a four-year period. So I have the first drafts of books two and three in rough form. So book #2, Dyson’s Drop, should be out next year some time. I’m working on it now.

Q: I love the striking cover image. Is the glimpse of the galaxy beyond indicative of Maximus breaking out, moving beyond or that he’s heading out into the galaxy on his missions?

A: It is. Although the main plot is Maximus looking for three sets of lost coordinates that are the key to an armada of dreadnoughts. Whoever has these will rule the universe.

Q:You’ve worked in some very varied jobs, Paul, such as pub bouncer, and serving time in the commandos. I see you’re also a black belt in ju jitsu and tae kwon do. How have these influenced your plotlines and have you passed on any of your skills to Maximus Black?

A: My martial arts skills find their way into many of my books, notably specific characters. Maximus is like most major villains — he gets others to do the fighting. His main hitman with Kilroy, who has more skill than I ever had in martial arts — don’t all martial artists in films perform the impossible?! But he’s equally matched by Anneke Longshadow. Anneke also squares off against a slew of baddies. She’s based on my all-time favourite heroine, Modesty Blaise.

Now for a couple of quick writerly questions:

Q: From an author’s curiosity, have you planned out the entire series or is each a book stand alone?

A: With this series I did write the trilogy in one hit. When I wrote The Jelindel Chronicles, Penguin only wanted the first book to test the waters. It went really well, so they requested the second book, which I then had to write. So the four books were written as separate entities, but that’s not really the best way to do it, I don’t think.

A: On many pages! Sometimes I write outlines for each chapter. Or I write a very long book and separate it into three books. This is what Danny Willis and I did with The World of Grrym (Allira’s Gift, Lords of Quibbitt and Morgassa’s Folly). This trilogy was originally one thick manuscript, but The Five Mile Press wanted it as a trilogy.

Thanks, Paul. I can’t wait until next week for visitors to meet you and Maximus Black too. Pop back then to read Paul’s exclusive post.