Mid-way through the year, I realise my pledge to read 52 books in this Year of Reading may have been a bit of an over-estimation on my part. Hey, I know what went wrong, I should have aimed for shorter books. All the ones I’m reading are hundreds of pages long. So from now on, I’m going to leave off the number of books I’m up to and just enjoy the reading.

I’m back into reading the era I’m about to write again for my new historical novel, set during and post WW1. I’m not usually one for war movies or books depicting the grit and gore of battles. My passion lies in the personal, emotional and psychological journeys of my characters, living through those times, but for me to understand how they think, feel and react I must read the books. Some are harsh; so is war. The more I read, the more I cannot believe that WW1 is not a key focus in our education system. Before I began researching four years ago, you could have grown crops of wheat to feed whole suburbs in the gaps in my knowledge. I still have so much to learn, as evidenced in my research trip, but I’m engrossed and passionate about the people and the time enough to set and write another historical saga in the same era as my previous novel. Plus I really need to write and learn more in order to understand what went on and what it was for. 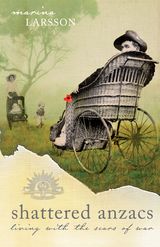 Shattered Anzacs living with the scars of war by Marina Larsson

Historian and author Marina Larsson explores the impact of war disability on the lives of soldiers and those of their families upon their return from WW1. Larsson comprehensively details the effects and attitudes of society, the government, and real families utilising interviews with the offspring of returned soldiers of WW1. Larsson’s text is accessible and highly readable, despite the incredible breadth of her research. The text explores the effects of having a soldier living in the household with an ongoing disability, often a “nervy” and “changed” man. It further addresses the  financial and physical effects and impact on disabled WW1 returned soldiers’ employment prospects.  I highly recommend this excellent resource for anyone writing on the experience and legacy of war. 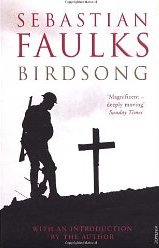 The strength of Birdsong is Faulk’s authentic battle scene descriptions and their shocking psychological effects on the men fighting. He takes you into the trenches and onto the battlefield. And he doesn’t let you escape a single moment of the unrelenting battle morning where tens of thousands went over top to be mown down, caught on the wire or tripped up in the bodies of their mates.  Events in the past are described in captivating detail – as if it’s happening now. The character progression of the main character, Stephen Wraysford, an initially selfish young man who seduces his host’s wife and whom appears to care about nothing and no one, is riveting. Alternating viewpoints enable a steady progression in Wraysford’s mental deterioration and those of his men.

I enjoyed “most” of Birdsong. Except for the modern day viewpoint of Wraysford’s grand-daughter, which to me added nothing to the story. The character Elizabeth discovers/reveals nothing that couldn’t have been shown in “real” story time. The writing in this section also dragged the reader out of the atmosphere of the story and read as pure telling. The book does tend to “tell” a lot but the power of the battlefields prose kept me turning the page. It is a searingly authentic look at what our male ancestors went through and why these men were never the same.

Good words and thoughts, Chris. The sad reality about all war is that as a race we seem to learn nothing from it – we just keep fighting more wars.

I’m afraid we learn absolutely nothing, when after millions and millions died fighting the “war to end all wars”, they turned around and went to war again twenty-years later. So many reasons why wars start, what blows my mind is the question, particularly in the mass annihilations of WW1, why did no one say STOP? We cannot do this. The more I try to make sense of it, the less sense it makes!