Murder on my Mind 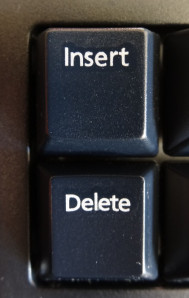 Going back through my old word doc’s spanning ten years, I came across some old friends as well as some cringe worthy try-hards.

I’m talking about old story files. Some with unrecognisable names – only to open the doc and discover that “Baldy”  and “Blue Cap Boy” were early renderings of my Nelson title “Darcy Devlin and the Mystery Boy”. Funny to read some of those early drafts. Characters names changed, plots changed, my God, the writing quality changed. Looking back I can see how far my writing has come.

It was inspiring to find some old friends, a few who may yet see print. Some stood up well to a revisit and are now resaved in a current folder to work on. Some pieces sent me ducking for cover. Oooh! Did I write that? A few I’m embarrassed to say were even sent out to publishers: way too prematurely without earning the price of their postage.

It was fantastic to see the metamorphous of most stories. How they developed and improved and then found publication. (Not too many fell onto the page and converted to contracts, though a select few did.) The exercise proved the endurance of my apprenticeship, which is what I believe this past decade plus to be.

Thank goodness, most manuscripts improve dramatically with redrafting. This proved itself even more when I opened an early version of my current adult historical novel. I thought it was developing pretty well a couple of years ago, but I laugh now to see the overwriting and so many bits that are now gone. Some that I loved too. Then there were the gems that have been there from the start. 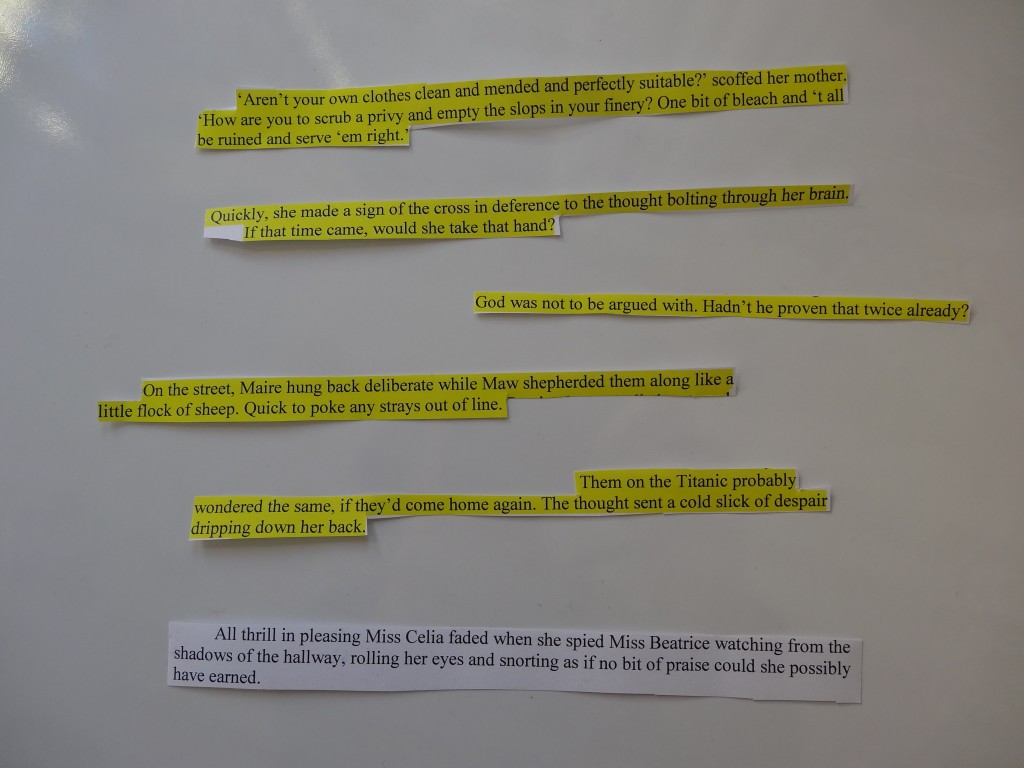 In the last couple of months, I’ve had murder on my mind. So many of my darlings to kill; some beautifully crafted sentences and descriptions that I worked and  reworked, tweaked and loved, yet still had to guillotine and be ruthless about which had earned their place. Did they push forward the story, the characters, the plot? Sadly, some did not. They had to go. Some spent weeks highlighted in yellow because I did not want to give them up. And then as I read the manuscript without those words, I could see they did not need to be there.

Of course, I kept those that add atmosphere, setting and tone to the story, but I became hard-hearted as to which did and did not add to these things. Sometimes, the words were not too shabby (even if I do say so myself) but too much detail. Hit that delete button.

I also worked hard at turning my main character’s face to the camera. Turning exposition and narration into her viewpoint, which in turn reduced extraneous detail. All of it beautiful prose, I’ve been told, but not all of it necessary. So cut – more words gone.

I even chopped another character out of existence. She was a lovely moment in the story with a couple of loose connections, but she had no impact on the story or real reason for existing beyond set decoration. Goodbye Lily.

I can honestly say the manuscript is tighter for these departures. The pace has picked up and in turn I believe the page turning drive increased.

What a journey? What a rollercoaster ride?

It’s been fantastic looking back where I’ve come from, but I’m totally excited at where I’m heading with my historical novel not too far off ready to go out into the world.

What’s your writing journey? Where are you on the path? How many drafts do you do? Or do you find, like me, as many as it takes?

I, too, have had murder on my mind. There is such a thing as justified homicide, at least when it comes to writing fiction. Wonderful blog post, Chris. I enjoyed reading about your manuscripts and how you murder some of your darlings. I related to your experiences. Thanks for sharing.
Love and Light!
Robyn

Hi Robyn
It’s amazing the power we writers have, at least with our own words, even acting the hand of God with our characters killing them off and occasionally resurrecting them. Usually the manuscript benefits hugely from a little murdering of darlings and more so with a lot.
Best,
Chris

What a good idea, as well as a brave thing to do Chris. Glad you found some characters you don’t have to ‘kill off’ too. Great post.

Great post, Chris…and what an amazing effort. I know how hard it is to come up with 15,000 words…it must be even harder to get rid of them:)

Thanks, Dee.
I have to say I enjoyed creating those 15,000-words much more than getting rid of them. Especially since there were only a few short scenes to lose and the rest went through painstaking, line by line editing. Eeek!
Sounds like you’re powering on with your new manuscript. Best wishes for it to grow apace.

Not sure about brave, Corinne. Some hurt like hell to give up and I sooked over those ones. Then hit delete anyway. Glad to say I’ve got a few hard-working characters still standing.
Chris

Great blog Chris. And who knows Lily may appear in something else?

Thank you, Dale.
Lily is tucked away safely and may come out to play again in the future. I like her. Who knows, she may end up with her own story one day.
Chris

Hi Chris, Great to read your murderous blog.
I have the opposite problem atm.
I’m an under -writer and desperately to to add word count and detail to my memoir, ME & HIM, sequel to ME & HER.
Trying to find an extra 15K can be just as challenging as trying to lose 15K
Above all, I need the luxury of time to achieve that.
Cheers,
Karen 🙂

Hi Karen
Thanks for stopping by.
Both the adding and the losing of words can be equally challenging. With adding words, sometimes you need to step outside the direct story and find (in non-fiction)/create (fiction) a sub-plot. Something relevant to thrust forward the narrative and add tension or an extra dimension to the story. I wonder for yours, do the words lie in an aspect/place or person you’ve not explored yet.
I agree time is crucial though for creating new words. But thrillingly for you, your busyness is due to the success of your book one. Congratulations.
Best,
Chris

Hi Chris, Thanks for your inspiring reply. You got me thinking. Today I Faced my Fears and wrote that chapter in ME & HIM : a Guide to Recovery, the one I was avoiding … Finally I’m Brave enough … Karen 🙂

Fantastic, Karen. It was obviously there, waiting to pour out. Congratulations, and I think you’re definitely Brave enough.

Hi Chris,
Fabulous post. You describe well the feeling of knowing that you need to cut, but oh you love those words.
I think the first cut really is the deepest, but after that it gets easier and easier.
You have done an amazing job with your ms.
Looking forward to seeing it published one day soon!
Alisn

Hi Alison
Thank you. Thank you doubly, because it’s you (and my other valued critiquers) that inspired me to keep going and that the story is much better for the pruning.
Hope I have some good news for you one day in the not too distant future. You’ll hear the scream from your place.