The BIG Question in your Novel? 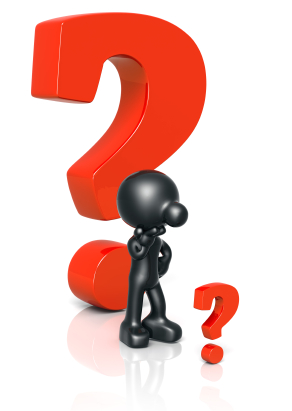 The first time I was asked: “What is the big question in your novel?” I responded with a blank look.

BIG question??? Hmm! Hadn’t really thought about a BIG question. I was just writing what I hoped was a cracker of a story and following my main character’s journey through a testing and changing time for women during the era of The Great War.

“Wrong. No! You must be writing to answer a question,” insisted my uni research tutor.

Turned out, I was actually asking and exploring quite a few questions, but it took me some considerable effort to seek them out and, even more so, to articulate them and find the core question.

Being an historical novel, I thought, at first, that my questions would be very different to those that might be posed in a contemporary story. I considered them to be all about a woman’s right to happiness and did they have any rights to it, over duty, in the era of 1912 – 1920? I thought the question not relevant to young women in western society today, who often have so many choices.

Eventually I worked the major question in my novel through to:

At what point do we question the rightness and rationale of what we’ve been taught? (Or should we?)

Of course, this turned out to be a timeless question, relevant to as many women/people in the world today as much as a century ago. A right of passage and a question that – in some form – has  been explored and debated in books the world over – through every genre. 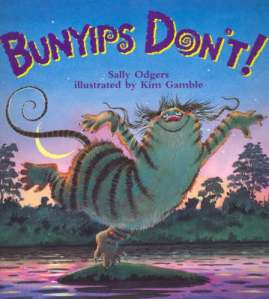 I remember having a debate with my Writing for Children tutor, several years ago, when I wrote a glowing review on the picture book Bunyips Don’t by Sally Odgers and illustrated by Kim Gamble. My tutor maintained how could the book end with a celebration when Young Bunyip had moved to the sunny side of the swamp with new friends leaving old Bunyip alone? To her, Young Bunyip was bucking his heritage and a selfish creature for deserting Old Bunyip. I argued that Young Bunyip tried to encourage miserable Old Bunyip, living in the dank and dark, that he could dance and play (be happy) on the sunny side of the swamp and to come with him. Old Bunyip chose not to just because Bunyips Don’t dance and play and live on the sunny side. He chose to live the same old unhappy life rather than make a choice to change. In the end, my tutor was more convinced but still struggled with Young Bunyip “abandoning” his heritage and his kind’s way of life.

Doesn’t enjoyment and love for a book often come down to reader perspective?

If I hadn’t been going to uni, would I have ultimately learned as much just in the writing of my novel and formulated the same BIG question? Perhaps!

But the scope of my Master’s degree insisted I explore and articulate the social context and big question of my novel leading me to discover and thrill to what I discovered were the many layers to my story. Many intentional but some that I found had emerged organically too. 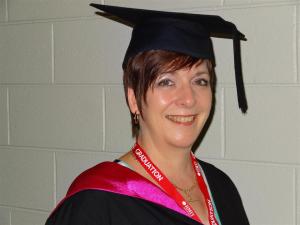 So last week, I walked the ramp to the RMIT graduation stage with a huge grin on my face and grasped my degree, very pleased and proud to be a Master of Creative Media (Creative Writing) with Distinction.

Now – onward to get my novel published. And discover the BIG question in my new manuscript/s.

Often I hear writers asked, did your idea spring from plot, character or setting? Not, what question are you asking. So I’m asking you: Do you write with a BIG question in mind? 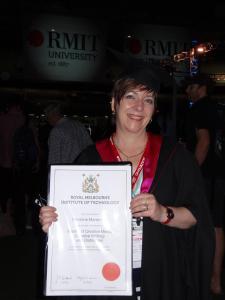 Thank you, Gwen. Great to see you here. Good luck with your own writing journey.

I admit, I’m a questioning kind of soul. Sometime though, I am not even aware of the question or questions that surround a story, plot, character. It’s a revelation and loads of fun discovering them or conjuring them though! Dimity (Happy Christmas too Chris. Enjoy the moments – without question! 😉 )

Wishing you and yours a very happy, festive (and restful) Christmas.

Categories: Musing on writerly topics My writing journey Reading and Writing Research The Creative Process Where do Ideas Come From? Writing a Novel