Because we have TOO MUCH STUFF! 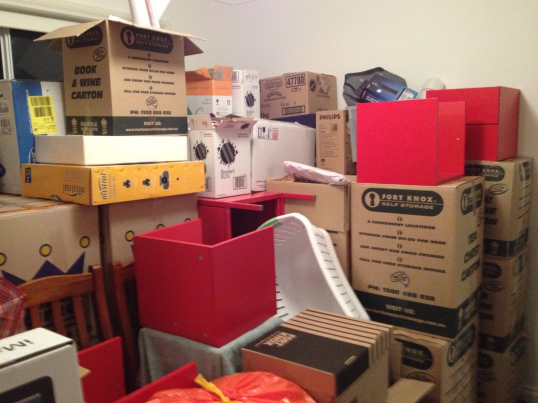 After all my best efforts to cull unnecessary bits and bobs and dispose of the long gathered minutiae we’ve accumulated over twelve years in the house we’ve just vacated, I thought I’d done a pretty good job.

But as you can see in the pic, I’ve boxes of stuff still unpacked. Stuff that’s now living in the spare room upstairs, because there’s no room in our small temporary abode. That’s right. We still have one more move to go. So I will have another chance. But, unlike the pressure of getting down a word count in writing, no one gave me a box or volume limit when packing. Though you’d have thought so from the sighs and moans of the movers who had to cart our boxes up the stairs.

The fact that there is so much stuff relegated to storage, not immediately needed, tells me I didn’t do the ruthless cull on my house that I’d do during a good word count slash on a WIP.

I guess it’s the same quandary. Sometimes it’s hard to see what’s worth keeping. We hold on to lines and extra linen we love, beautifully crafted sentences and spare salt shakers, hard wrought descriptions and hard bought dishes that we just might need one day.

But, if I can live without all this extra stuff for several months – and not miss it – until the house we’ve bought settles, do I need it?

I suspect the problem is it’s a bit like superfluous plot lines and peripheral characters. We don’t usually need them, but they’re awfully hard to dump. They took time to dream up and craft. We might want them back for another purpose the moment we’ve written them out or off.

I sold a couple of freestanding towel rails that I now really need back. Too late!

At least we never have to lose anything entirely in our writing. We can cut and cull to our hearts content and pop it all in a saved file, ready to grab back if needed. Op shops and online purchasers are not quite so understanding or restorative.

So I’m probably keeping way too much. And it’s not helped by the fact we are moving into a larger house again soon.

I really do like a good word count slash. The work always comes up stronger, clearer, cleaner without the dross. Now if I can just get rid of some more of my crap – pardon, I mean stuff – I’m sure my house will be cleaner and clearer too.

But can’t I just store it in the shed for a few months until I’m sure I won’t need it again?

Moving house is actually very exciting and cathartic. Not to mention inspiring for this writer after coming across a removalist who desperately belongs in a story. Stay tuned!

One of life’s magic analogies. The bit I like best about moving is unpacking. Bit like Christmas morning, until you have to figure out where it’s all going to live. Good luck Chris!

Dimity, I so agree that the unpacking is best. And a bit like Christmas. With a few months between when I started to pack and when I can unpack, I know that I’ll be finding things I’ve forgotten and will have those ooh! aah! moments as I reclaim old friends and forgotten treasures.
🙂
Chris

Lots of hard work and many decisions. Even thinking about moving sends me into a wild panic. Glad things are quieter now, Chris.

Hi Corinne
Yes, I agree, moving house demands a lot of hard work and decision making, but I find a good shake up and change is so inspiring and liberating. Maybe it’s the Gemini in me, but I love the challenge and adventure too. This one is certainly proving double the “fun”. The timing is indeed perfect! And I am now loving the freedom to write in our little unit needing little housework. The few weeks off also gave me fresh eyes for my manuscript too.