bolter – one who runs away or leaves a place suddenly 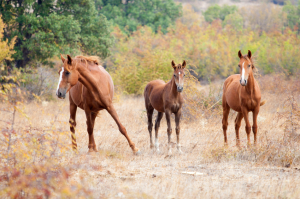 Horses in convict Tasmania were a rarity. The high cost of owning a horse was prohibitive and usually only wealthy settlers, senior officials and military officers rode or owned the animals.

Just one of the interesting snippets I’ve learned while researching my current WIP. I read heaps and did lots of research before even starting to write my story, but some of the everyday work/life details, I just merrily wrote in thinking that I would verify the details later. Horses and dogs seemed a given, but then I discovered – no, not so. It’s amazing how changing some of these small details can require significant changes to a chapter. We don’t just write ‘the man rode his horse’. We incorporate the imagery of that horse ride into the scene, which means that all the subsequent references, sounds of harness clinking, flicking a fly with the reins, smell of horse sweat have to go too. Of course, I would always rather discover such errors myself in draft stage rather than have someone pick up my mistake in a published book. Still it amazed me to discover that a horse, something I saw as part of ordinary, working day life in Australia, even in convict times, was such a rarity due to our immense isolation from mother England and the expense of shipping livestock so prohibitive. Nothing is certain in historical fiction until it’s cross-checked and verified. Even though fiction, it needs to be right.

Nice work! If I could match your efforts, I’d have this thesis written in a fortnight… x

Hi Wiresparrow
At this stage of wip it comes easier, but I have to say the last few weeks have been full-on, head-down. Plus I have benefit of working on my mss full-time. You are doing an amazing job combining Honours + a full-time job. And you’re nearly there!
🙂
Chris xx

Fascinating post, Chris.
In my imagination, I had everybody riding around on horses in convict times.
Was interested to read crap’d for hung.
Wonder if this is where crap comes from?
Alison

Yes, I had the same visions, but discovered not so. I’m still wondering if I watched too many westerns!

Ah, crap! Think that one was named for a guy who was big in plumbing – Thomas Crapper. (Though, from a quick Google, it seems lots of people think he invented the toilet, he was in fact more into selling them.)
🙂

Research is such great fun and I love how, along the way, I find out all sorts of trivia and little things that colour the detail in my stories.