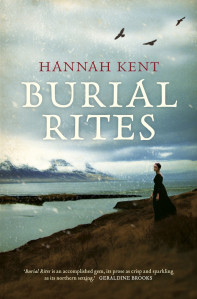 What?s not to envy when?a bestselling debut novel, published in 2013, is?printed six times in that same year (as it says on my bookshelf copy). Wow!

I?ve just finished reading Burial Rites by Hannah Kent and it?s easy to see what all the hype has been about. Kent?s beautifully written, empathetic novel of the last woman executed in Iceland in 1830 is an enviable telling. Based on the true story of convicted murderess Agnes Magn?sd?ttir, it re-imagines the last six months of Agnes’s?life, housed with an official?s reluctant host family, awaiting her execution.

Kent first heard Magn?sd?ttir?s story as a 17-year-old Australian exchange student to Iceland. The initial six-months of her stay were extremely lonely and isolating in a semi-dark, freezing, small community, without a common?language, and it is easy to imagine how she?would?ve connected with?and become haunted by Magn?sd?ttir?s story.

Kent’s?powerful rendering of weather in the novel had this reader shivering and imagining herself huddled inside the icy J?nsson badstofa along with the family. The seasonal shearing, slaughter and harvest beautifully dramatised the rhythm of the changing seasons and passing of time, creating a palpable tension that it was not the animals alone running out of time.

Autumn has been pushed aside by a wind driving flurries of snow up against the croft, and the air as thin as paper.

Magn?sd?ttir?s specific part in the murder was not revealed in the trial accounts or?records, leading Kent to re-imagine Agnes’s?part in the crime. Kent has said that where research couldn?t uncover certain facts or sources were contradictory, she had to work out what would be the most logical, or likely situation and in doing so?she had to walk an ?ethical tightrope?.

The?portrayal of Agnes’s part in the crime was?the one aspect of the novel that troubled this reader. Without giving away?any?spoilers,?my initial response jolted me out of the narrative. However, upon consideration, it was probably the one explanation that could have worked plausibly for the Agnes?character Kent created.

There could be no happy ending to what is an undeniably grim tale with a pre-determined fact based?conclusion, still?I found Kent?s quiet and sympathetic rendering of the ending emotionally satisfying despite the harsh finality.

It was somehow?reassuring for me to read too, while researching this post, that Kent?s mentor, Geraldine Brooks, encouraged her to ?let a bit more light in?, particularly to what Kent says was originally an even grimmer ending, since?I tend to lock out the light a bit in my own novels.

Most of us can only dream of the type of success that greeted?Kent?s first novel. But, according to interviews, Kent too suffered self-doubt during the writing. She really set out to gain?a qualification and didn?t think the novel good enough to be published. She entered a competition and there you go? A fantastic result and book, Hannah Kent, and a wonderful inspiration to all emerging writers?coming along the path behind.

WINNER OF THE 2014 INDIE AWARDS DEBUT FICTION OF THE YEAR

Hi Chris,
I started reading Burial Rights months ago, but was forced to put it down due to work overload. Thanks for this fabulous review of Burial Rights.
I’m hoping to pick it up again very soon … Karen 🙂

Hi Karen
Thank you, glad you enjoyed the review. I hope you get back to reading Burial Rites soon. It’s a marvellous read.
Best wishes,
Chris

Thanks for reblogging Minecraft.
Chris

Sounds a fascinating read Chris. A great report on it too.

Thank you, Corinne. I found the book a really terrific read and enjoyed writing what originally was supposed to be a comment post but turned into a review. I had to stop myself from writing an essay. 🙂
C

Great post Chris. Glad you liked the book. I must say Kent’s portrayal of Agnes’ part in the crime really resonated with me – a window into the complexities of human nature.

Thanks, Liz. Wasn’t it a gripping read, especially getting to know a character that you weren’t sure you were going to like in the beginning, yet felt such empathy for, despite her crime? And seeing the changing attitudes of those around her? It was fraught reading, really connecting me with Agnes’s character, knowing the inevitable ending. For me ,the complexities you mentioned made it such a powerful insight into what might have taken place. I like to think Kent’s vision of Agnes is right.
Chris