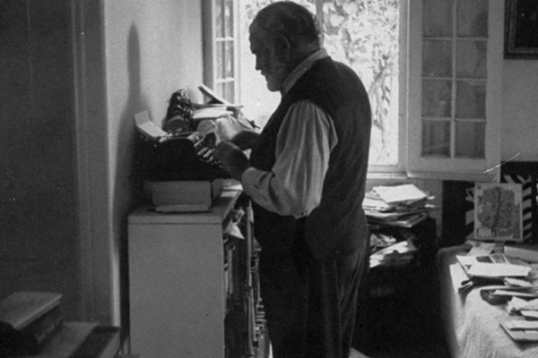 Standing up to work is a growing trend, though it seems Ernest Hemingway always wrote standing up due to a WW1 war injury. Only he stood at a typewriter balanced on a bookcase according to a 1954 interview with George Plimpton in The Paris Review. “He stands in a pair of his oversized loafers on the worn skin of a lesser kudu—the typewriter and the reading board chest-high opposite him.”

I can’t boast such an exotic foot mat as Hemingway, but I’m really excited to have a brand new standing desk thanks to writer and Facebook buddy Tania McCartney heralding the Varidesk you see pictured below.

Hemingway wasn’t alone. Well he probably was, while he was writing, but it seems that a few other well-known writers stood up to write too i.e. Lewis Carroll, Alexander Nabokov, George Sand and Virginia Woolf. So it seems I’ve joined good company. 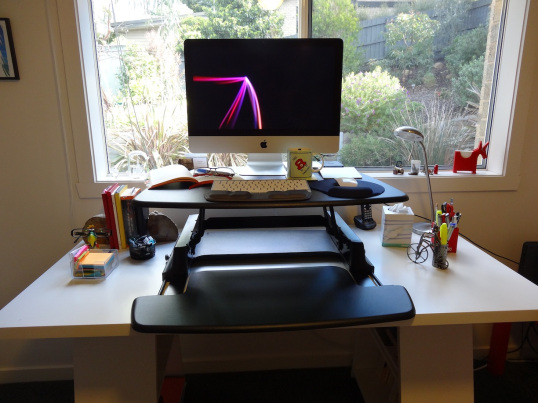 Lots of medical studies these days are revealing the health benefits of standing up to work too, at least part of the day, including James Levine, an endocrinologist at the Mayo Clinic who cites the following benefits:

(You can read more on Levine’s study: http://www.smithsonianmag.com/science-nature/five-health-benefits-standing-desks-180950259)

I’d never heard of a standing-desk until I went to work in 2004 for a company run by an innovative and very creative Dane. To me, at first, standing up to work seemed a very tiring idea. But, as I learned through my occasional opportunities to stand up at one or other of the two standing-desks in the office, it’s really good for your concentration, not to mention your back and posture.

I’ve often thought of getting a purpose-built stand-up desk in my own office at home since, but couldn’t justify the expense fearing that my good intentions might tire quicker than my legs.

So, YAY! to Tania because the Varidesk is a very good idea. More a riser than an actual desk as it sits on top of my desk, but it’s really easy to put up and put down so I can stand up or sit down to work at a whim. It even comes with an app to download onto your computer to tell you when to stand up, sit down and even how many calories you’re burning. I don’t quite care how accurate it might be calorie counting-wise, but it’s a great reminder when I’ve been sitting awhile to stand up again.

I’ve got to say I work best standing up to email, research and even type a blog post, but when serious prose writing I tend to need to sit down. I get so absorbed that I don’t want to strain anything standing too long, since in these early days of adjustment, I’m not quite in tune yet with the whole standing business. I just know that my back is going to thank me long term and hopefully my butt and hips too.

Mainly I’m just aiming to be fitter and thinner, and hopefully live a whole lot longer to write a whole lot more books!

I stand at work all day, so I look forward to sitting at my desk when I get home. I think it’s all about balance. I know my back hurts just as much after a 6 hour shift on my feet as it does if I sit for 6 hours straight. Your desk apparatus sounds intriguing though. I’ll be interested to hear how it goes.

Sometimes I just want to sit and slouch, Leisl, but for simple tasks especially, I find it good to stand. If I’d been on my feet for six hours like your shift, I don’t think I’d be awfully keen to stand to write either. Keep you posted. 🙂 Chris

I can’t imagine writing while standing. I must be a sluggard. But…I guess if I had a sore back I’d give it a go. Better than not writing at all. 🙂

My problem is that I get stuck into the writing and take no notice of my posture, Liz. Thank goodness I’m a cup of tea lover and that gets me up and heading for the kettle fairly regularly. 🙂 Chris

I’m not really sure that I could right standing up. I’ll have to try it. Interesting, Chris and something different.

Give it a go, Corinne, for shorter stuff and see how you go. If the studies are anything to go by, it’s supposed to have great, long term benefits.

Tags: Standing up to write