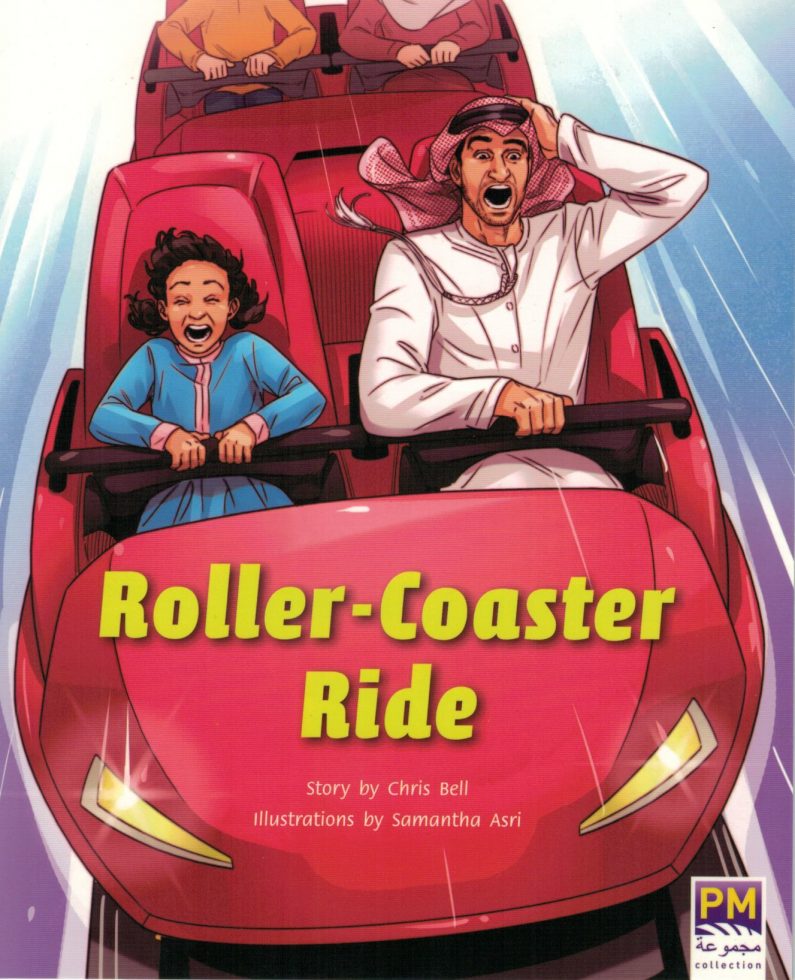 What better way to start the New Year than with a new edition of an old book baby! Just before Christmas, I was delighted to receive the new Cengage Learning multicultural version of my 2001 title Roller-Coaster Ride, re-illustrated by Samantha Asri to set the story in the Middle East for early Arabic readers.

I was surprised to find only a couple of words had been changed in the text: the main character’s name has changed from Rosie to Yasmin; hot dogs have become shawarmas (an Arabic meat dish cooked on a spit and served on a plate, or in a wrap etc.) and Asri’s vibrant illustrations portray Middle Eastern dress and an updated, ultra-modern theme park. Otherwise the book is pretty much as originally published.

I thought the best time to share this new version was when I was also launching a new edition of moi. You know, New Year’s resolutions and all that. Okay, it’s only one week into 2016, but so far, I’m on track to a new, improved version of Chris Bell writer. A fitter, slimmer, less creaky version! Well, I’m hoping so anyway.

Too many hours at the desk last year resulted in way too many sessions at the physiotherapist trying to straighten out the kinks and creaks and knead some very stiff, un-cooperative, lower back muscles back to their natural state. (Though I’m beginning to wonder if that state has permanently altered.) My own fault! Even though I stand up at my stand-up desk (at times) and regularly get up to make an obligatory cup of tea, I still can’t unpretzel this body. I admit though when I’m in the writing moment, the cup of tea goes cold, the sun shifts in the sky and all else is forgotten. It’s then the neck resorts to angle stupida and correct typing posture slumps into compaction mode. 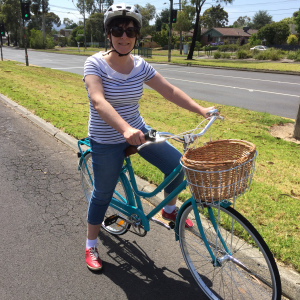 So time for a drastic author makeover, thanks to Santa, who brought me a brand new bike for Christmas. (Isn’t it gorgeous?) Yay! It’s fantastic fun too. Nothing compares with the wind in your face and thrill of zooming down the road. (Downhill is the only way I can zoom – yet!) But, oohh, it’s such hard work on the way home. Certain muscles are being dragged screaming to the party and complain bitterly of a hang-over the next day. But onwards I go, rewriting the book on Chris, determined to wrestle this reluctant body into healthy compliance. Oh, there’s plans  for other radical edits too. i.e. swimming. In an actual swimming cossy even! Pilates – an ongoing redraft. (I love it.) But foremost, less wine, less chocolate and desk snacking, more exercise in general and more awareness of the world beyond the desk.

Hi Chris, All wonderful plans in place, certainly sounds like you are set to go. A great reminder for all of us to take care of our bodies while we work. The new Roller-Coaster Ride looks terrific and yes, signal of a brand new beginning. May it fly high and others follow in quick succession.

Roaring to go, Corinne, but I need to build up gradually, particularly on the bike. Hope you’re right about “others”. xx C

Nice bike. We’ll have to meet up and do a ride when I get back. 🙂

Sounds great, Liz. Though I’m going to be strictly a bike path girl. The road and traffic is quite terrifying to me. I nearly fell off just hearing a car coming on day one. 🙂