The Value of Conferences – CYA 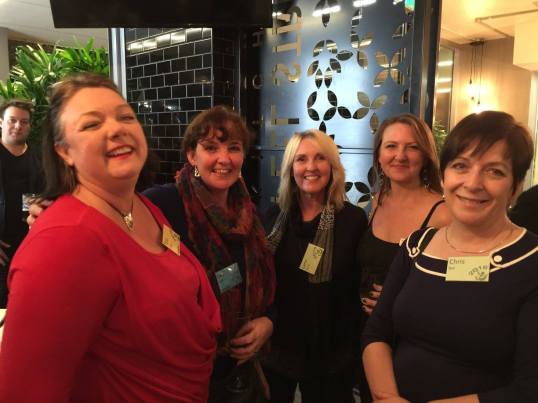 I can’t believe it’s been weeks since I attended the fantastic CYA Conference in Brisbane. I’ve been head-down ever since, following up on manuscript advice received during my two publisher assessment sessions and giving social media a narrow gaze. 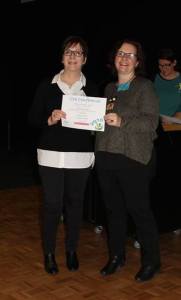 I was really excited in the weeks prior to the conference to be shortlisted in the 2016 CYA Writing and Illustrating Competition – published author category. It was fantastic that I was already booked in to attend the conference and so I was there to receive a “Highly Commended” award for my middle-grade eco-fic novel Strange Creatures from the judge, Scholastic Australia publisher, Clare Hallifax. I was extra pleased with my HC as there was only one overall winner (congratulations Facebook buddy, Karen Collum), but no placings in this highly competitive category.

It was a great boost to see this 19000-word story that I wrote several years ago with the intention of making it book one in a trilogy appreciated and acknowledged. I’ve always loved the characters and the setting and thought I had not perhaps given it fair exposure at the time as it always seemed an awkward word-count. So I worked on it some more and entered it into CYA and it was really terrific to see it awarded in the competition. I look forward to reading the initial judging reports, which give the added bonus of feedback to entrants in the CYA competition. 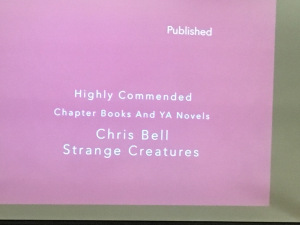 During the conference I had two really positive and informative meetings with publishers regarding my YA historical novel and received some great advice. 1. Begin in setting and introduce character’s day-to-day life 2. Use less language of the time.

The first suggestion initially surprised me because I’d always been taught – in kid lit – begin with action. But during the conversations (which offered very similar advice) I came to realise that, with my character’s world and time being quite foreign to the reader, to begin in drama gave the reader no chance to come to know or care about the characters before the initial dramatic interaction and danger. Invaluable advice and well worth paying for. This is one the value of critique and manuscript assessment sessions offered to attendees of conferences and seminars.

Both publishers are keen to see the reworked manuscript, so it’s back to work for me.

Great pieces of advice and thanks for sharing, Chris.

Pleasure, Kaye. Great to have your company and enthusiasm at the conference.
Best, Chris

I’m inspired by your professional persistence Chris. Let’s hope they love the changes you have made.

Thanks, Liz. I hope so too, but I strongly believe this is a good story. I just need to tell it in the best way to share it with readers. (And publishers, of course. 🙂 )

Lovely to read about this wonderful success Chris and the background to how it came to be. Conferences, gatherings, book clubs, writers groups . . . essential for us all.

Thanks, Corinne. I was thrilled and even more so today when the individual judge’s feedback arrived in my inbox. All terrifically positive. 🙂
Best, C x