Research can take you there!

There are so many touchstones that I come across in my research. Small poems, articles, images or videos that connect me to my story. 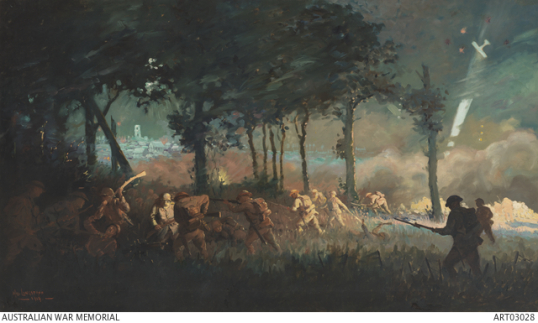 In the spirit of my promise to not make my every blog post lengthy, I want to share more of these poignant and emotive links to a past that somehow I am irrevocably joined to – if not through story, some unexplained connection. Since I had few (and not close) family members directly involved in the Great War, I cannot explain my deep affinity for such an horrific event. Originally the era fitted one story but my new WIP and the novel planned after that are all turning out to be closely involved with WW1. Perhaps it was the week I spent in 2012 visiting the battlefields and surrounding war museums that connected me, not so much to the war as to the stories of the men who fought and to the people of the Somme who endured the war raging over their countryside and through their towns and villages.

Now, deep in the writing of a turning point scene, set during the Second Battle of Villers Bretonneux, the image above depicts the night battle that saved the town. Though it nearly destroyed it too, the battle and the Australian battalions’ efforts changed the face of the war.

This image is blu-tacked to my computer and takes me right there, into the mist and smoke and desperate fight lit up by shellfire. Combined with the haunting and heartbreaking music of Karl Jenkins “Benedictus” that I’ve been playing while I write the aftermath scenes, I rarely fail to tear up. #am writing #amlovingwriting

Wonderful to be so passionate about a story, Chris. May it fly.

Thank you, Corinne. It’s burning to be written.