No Small Shame – The Dreaded Edit

The dreaded round one edit for my novel wasn’t so bad! After all!

I wasn’t sure what to expect for my first novel-length edit. My previously published work has either been short fiction for children that I can truthfully say had very few changes made to the words, or short stories published in anthologies and literary magazines that were all edited in-house with no input from me. So I wasn’t sure what to expect, other than that the publisher had said that the manuscript didn’t require a full structural edit.

I was still a tad nervous before the files arrived. What if the freelance editor had different ideas? What if she wanted major changes? What if she didn’t get my book? What if she hated it? You know the type of writer thoughts fuelled by an over-zealous imagination.

Well the editor’s files duly did arrive. A huge sigh of relief could be heard as I read her report. There were some lovely words expressed ie: compelling narrative; strong protagonist, distinctive voice; highly engaging; nuanced view of human frailty, complexity of character etc. All wonderful positives to read and very reassuring to a debut novelist.

The editor provided a structural analysis and made some suggestions for better establishing some of the settings ie: where they were located in relation to other places, the mileage and time distances etc.

I also needed to do some more work on a couple of the minor characters to give ‘a stronger sense of who they are—both independently’ of my main character ‘and outside of their narrative function’. Though this involved careful thought, words-wise it only really entailed adding a few lines apiece, but these truly made a difference and either brought in or strengthened existing character traits or backstory in subtle but important ways. 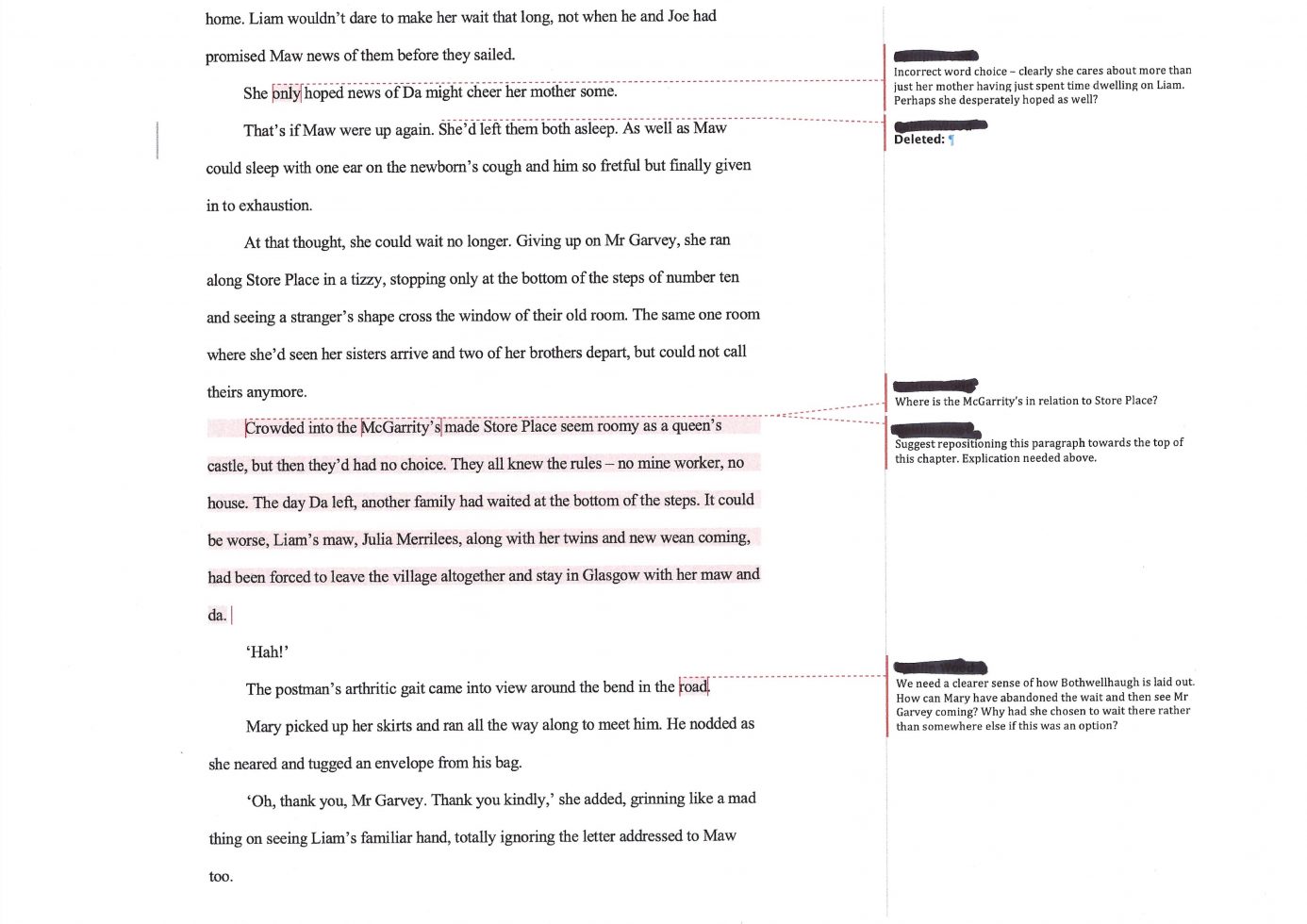 I then had to tackle the issue of my ‘unwieldy syntax’. As mentioned in a previous post, the voice of my novel is distinctive and my unwieldy syntax the narrative style. But, along with the editor, I do want the prose to be readable. So a delicate dance ensued where I had to make some tricky decisions, to simplify or not to simplify. In many cases, I rewrote the sentence. Hopefully it will still be highly readable and yet still retain its unique voice.

Though I know my edit was not overly onerous as many edits can reportedly be, and I was very fortunate to be given a very reasonable deadline, being a bit on the conscientious side, I took my full allotted time to get it back. And, because I’m running behind in keeping up with my blog posts on this last intense leg of the journey From Hook to Book, before I could blog about the first round edit, the second round arrived.

It was all very straightforward. For me, the hard part was sending it back once it was done. The terror of knowing that once I pressed send, it was gone and unchangeable. The next time I would see the manuscript, it would be typeset and at proofreading stage. I would then not be permitted to make any changes unless they were true errors. Terrifying! Of course, I met the round two deadline, but I didn’t press send until the very last day!

And then I promptly got sick. A bug I couldn’t beat and a cough that wouldn’t go for six whole weeks. So I guess the edit was more stressful on me than I’d thought.

I learned so much through the process though, particularly the fascinating difference it made in adding some tiny details that expanded my minor characters and gave a deeper insight into their backstories in such small but significant ways. We writers are so blessed to have editors.

Now back to work. Guess what’s just arrived – yep, the proofread round. I know I’m going to have to sit on my hands and fight the urge to fiddle, unless I find a real, actual error.

But it’s all happening and getting so exciting! The book is in sight.

Stay tuned for a cover reveal. It’s going to be any day now!

What a great post, Chris. Enjoy every step and bend in the journey – you deserve this so much.

Thanks so much, Corinne. I am enjoying every step and bend! 🙂

Introducing a new Children’s and #YoungAdult Books category to our ARA #HistoricalNovel Prize! The winner will receive $30,000, while the two short listers will receive $5,000 each. Entries close 14 June. https://hnsa.org.au/the-2021-ara-historical-novel-prize/

Have you always wanted to write a memoir? This full day workshop with @LeeKofman will teach you how to structure your memoir, write compelling characters and engaging experiences. Learn more https://www.storyfest.org.au/2021-friday-events/#introductiontomemoir