No Small Shame: The Launch (a slight change of plan!)

The book launch is a rite of passage for a debut novelist. I was that excited about mine for No Small Shame, I booked the launch at Readings Hawthorn way back in December.

Back then I had no idea what was coming! 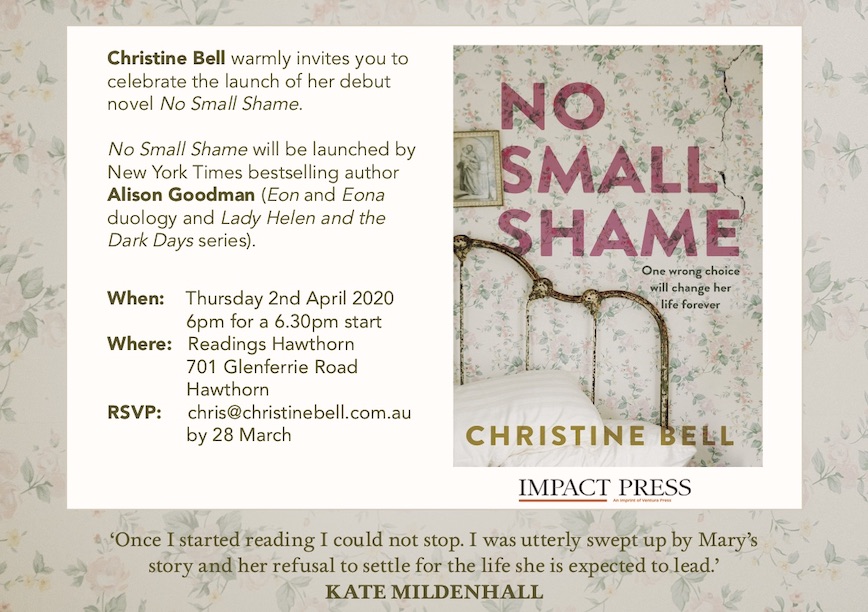 Early March I sent out the invitations believing I had four weeks to organise invitations, nibbles, wine, an outfit, and to get out and introduce myself to booksellers, knowing that Ventura Press’s wonderful distributors, Simon and Schuster had been out and about already and the book was on pre-order. Then the Corona sky began to darken as the nightly news went from worrying to more urgent to lockdowns imminent.

There were tears! And disappointment. But, I do have to say that any misery quickly dissipated, thanks to the instant and voluminous outreach by the online writing community to authors who’d had their launches and events cancelled. Along with some particularly wonderful offers to assist debut authors. 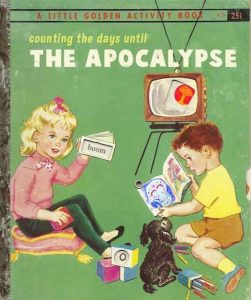 That same day, author Kirsten Krauth set up a fabulous new Facebook group, Writers Go Forth. Launch Promote Party to provide a forum for authors to promote and celebrate the release of their books. Opportunities and offers began to flood in and within days I had several fabulous blog and interview spots lined up and two very exciting guest spots on podcasts. Holding a launch online began to seem a real possibility too – though I’d no clue how to go about it. Even, a few days later, as I scheduled and posted news of my virtual launch, I wasn’t sure how it would all work. At first, the plan was for the wonderful Alison Goodman, my launcher, writing buddy and friend, to come to my house, so we could either record or livestream proceedings. We decided, being online, we needed to make the launch more interactive than just speeches, so we’d do a short QandA.

Within a matter of days though, social isolation regulations became more stringent, the need for care more urgent, and the plan changed to prerecording the launch from our separate houses. Perhaps via Zoom.

I wasted several stressful days trying to work out if we could livestream from separate houses, or run a pre-recorded video during a livestream. It’s allegedly possible if you have the know-how and technology. We did not! So we reverted to Plan B, to pre-record the actual launch and then once it played on the night, I’d flip to a livestream. Right up until the moment that the livestream worked, I wasn’t sure or convinced it would; despite having a phone tutorial on the process from author and wonderful author and tech whiz L.J Owen.

There were a few little hiccoughs along the way! Facebook didn’t deliver all my invitations. Apparently, they have a guest limit and a send only a few ‘at one time’ limit. Some guests were unable to comment during the event. I’m still not sure if it was the group Facebook settings or the guest’s privacy settings? However, I was thrilled that most people managed to let me know that they were there either in the comments, by text, Messenger or email.

I’d seen from others’ experiences how hard it is to search through all the lovely messages and comments to find the questions, so my daughter was on stand-by (at her house) to text me any questions via my laptop.

I am thrilled to say now, that on the night, all went exactly to plan. The video uploaded and played; and when it finished, I successfully switched to the livestream. I was hugely relieved though to see that first message appear in the comments, letting me know that someone was out there and watching. Questions duly arrived via text giving me the chance to talk about the journey of writing No Small Shame and share some of the research and background to the novel. I’m still amazed how natural it all seemed. And it was an absolute joy to know that so many family, friends and peers were there watching, including many that couldn’t have been at a physical launch here in Melbourne. Sadly I did lose a few guests when we switched to livestream who’d not realised the launch was to continue.

It all felt like a real celebration! And strangely, I didn’t feel solitary or socially distanced at all. No, the night wasn’t what I’d planned; but that didn’t lessen the joy of holding up No Small Shame, knowing it was out in the world – finding readers – and being read.