Releasing a book in Lockdown! 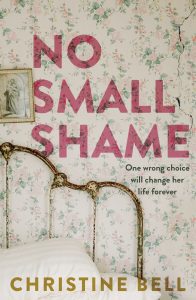 Releasing a book during a pandemic lockdown, what can I say? Probably quite a lot, but I’ll try to keep it nice!

Honestly, if anyone had told me that this would be the way of the world when my debut novel came out, I’d’ve probably thrown my hands in the air and despaired.

Six months ago when I talked of the strangeness of an online launch and lamented not being able to visit book shops, I’d no idea that come October, here in Melbourne, we’d all still be locked down and debut authors locked out of many of the experiences we’d long dreamed of, such as: launches, speaking events, signings, meeting booksellers and seeing our books on the bookshop shelves. Very, very disappointing, but …

It hasn’t been all bad. No Small Shame is “selling well” and the feedback from readers and reviewers has been overwhelmingly positive. For a debut, not highly publicised novel, it’s finding a lot of readers and lots of love. I am both delighted and relieved.

Just before the book was released, I had this sudden panicked realisation that No Small Shame wouldn’t just be read by unknown readers, but by people I knew. Old colleagues, peers, friends, the majority who are writers! And in that moment, I was grateful to be less visible. But I’ve been absolutely thrilled with the feedback I’ve received through emails, direct and private messages, and texts from so many people. I wasn’t really sure what to expect, but I’ve been both blown away and so grateful for the response.

A few months ago too, I had a few words to say in this short video (below), made for Murrindindi Library Group, on Writing in the Time of Corona. Hope you enjoy it!