The Year That Wasn’t …

2020 was the year that wasn’t at all what it was supposed to be for many of us. So many plans were cancelled or delayed, or never saw daylight due to lockdowns. But, alongside some major disappointments, the year also brought many positives for me.

This post, being February, is of course terribly overdue as either a wrap of the old year or entre to the new one that I usually like to write. But this time around I couldn’t quite get up the enthusiasm; yet my 2020 wasn’t at all the horror that some people had to deal with.

In the January I’d booked a research trip/holiday in Europe and was really looking forward to walking both the ground of my story on the Somme battlefields and the streets of Paris, and then holidaying with my daughter. Nup! None of it happened. 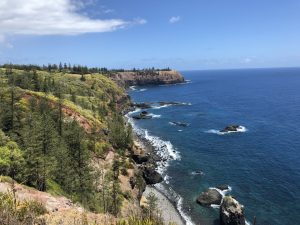 February began with blue skies and sunshine at a writing residency on beautiful Norfolk Island with no clue of the global shit storm about to descend. I am incredibly grateful for that carefree time: writing, reading, sunning and snorkelling, in what now seems like a different world and lifetime.

I returned to Melbourne at the end of February to reports of Covid infections rising and, along with most of the country, suddenly became addicted to the news reports which became more worrying by the day. 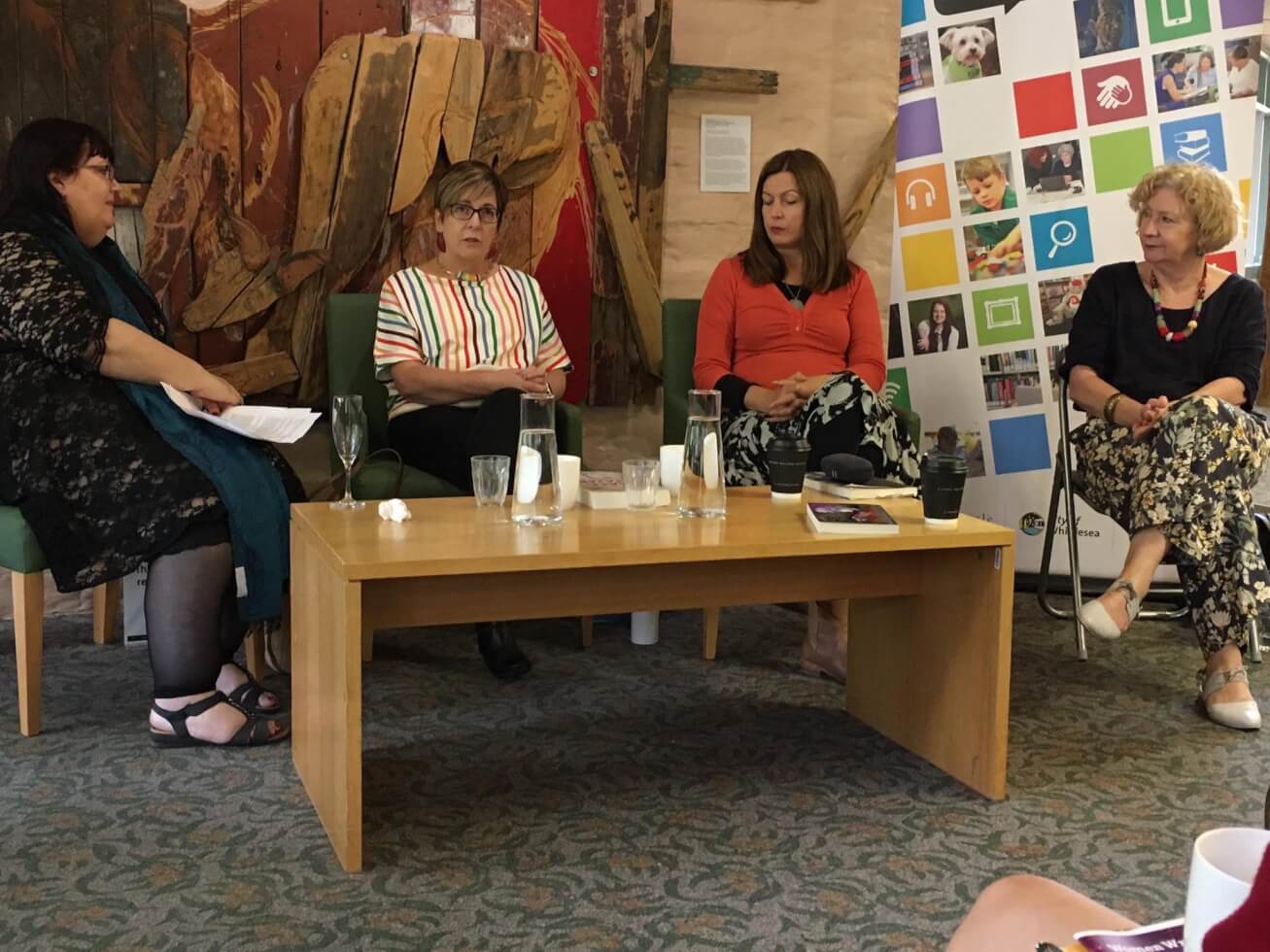 My first speaking event for my upcoming debut novel No Small Shame was scheduled at the Women Writing History Day at Eltham Library in mid March. I’d been excitedly looking forward to my scheduled panel sessions for months as well as several other speaking opportunities I had lined up. My publisher had given permission for me to sell copies on the day in a form of a soft launch. Thankfully, the Women’s History Day did get to go ahead and the chance to speak and sell and sign my books was fantastic and gave me a fleeting taste of the joys I thought I had to come. The panels gave me the opportunity to talk about both my book and writing and I was so excited to continue with the next events. But, two days later the cancellations began.

With all the signs suggesting a lockdown was coming, I dashed to a large shopping centre and saw and signed my books on shelf. Little did I know that it would be months and months before that chance would come again. 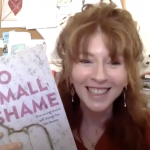 My launch for No Small Shame had been booked in at Readings Hawthorn back in the December. It was a night I’d long dreamed of and the invitations had been designed and sent. So I was crushed when the news came that all public gatherings were cancelled. I’d little time to mourn but as I had a mad scurry to prepare a combined Zoom/ Facebook Live event with no experience with the technology required. After a few stressful days of learning and testing the tech, wondering and worrying if it would all work on the night, the digital launch went off marvellously well; even if it was not the party and the in-person launch I’d been so looking forward to and my lovely launcher, author Alison Goodman, was in a different location. For me, it was still incredibly special and felt more real than I’d’ve thought possible. I was actually grateful in hindsight that I had so little time or notice but just had to act to make it happen.

All my publicity and promotion for the book then shifted to online and thanks to the generosity of the writing community, offering interviews, blog and podcast spots, word of the book did spread and while bookshops were closed, thank goodness, they were still selling online and delivering. Of course, my fear was how would readers really learn of the book of a largely unknown author without the in-store ability to browse or booksellers to hand sell it. So I was utterly thrilled when royalty time came around to see the sales figures for those first few months. 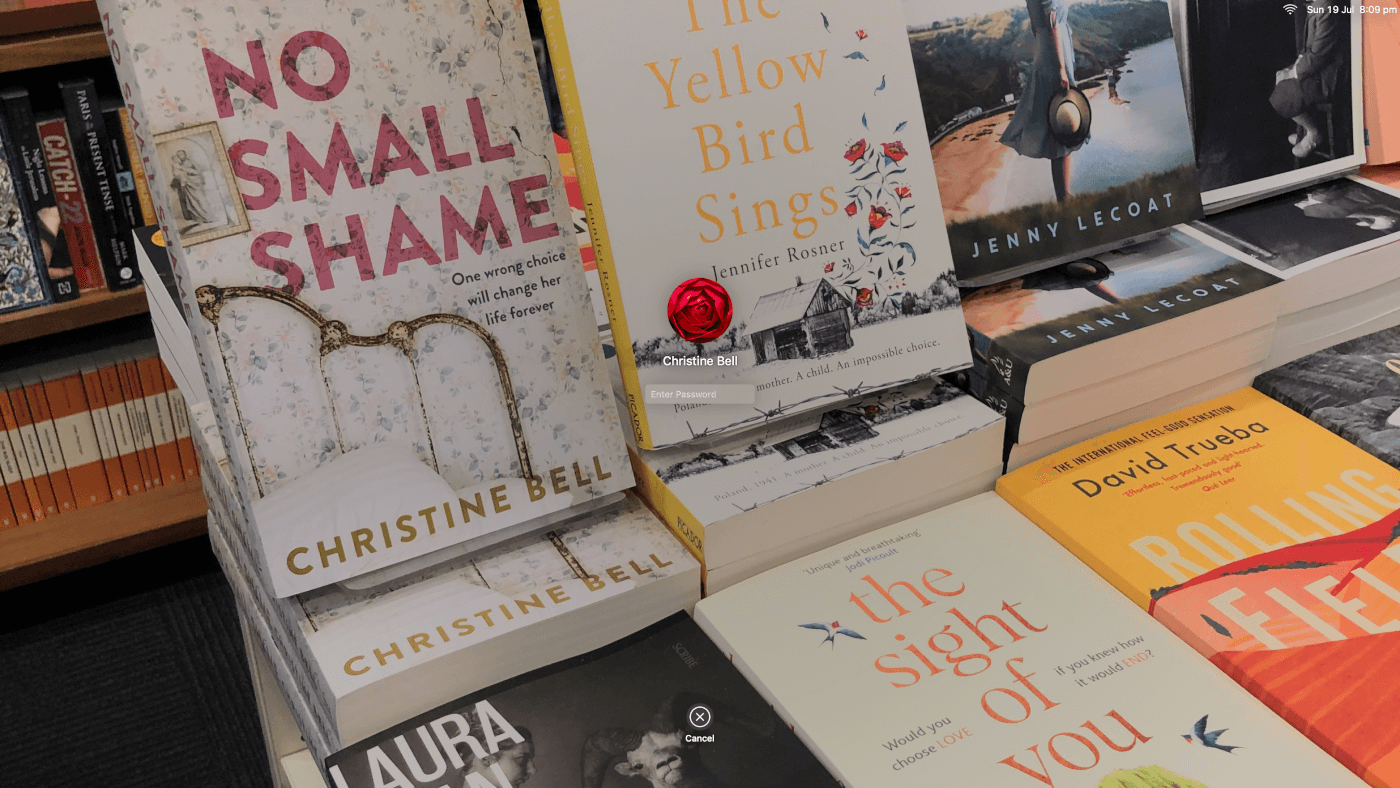 When lockdown ended in the May, I was absolutely champing at the bit to get out to meet booksellers and see and sign my books. But, at first, I was a bit tentative about venturing out. I did visit a couple of stores, but then, just as I began to feel ready to go forth and do the new author thing, Melbourne went into a second lockdown. Noooo! I was gutted! Meeting booksellers and seeing their books on shelf is an important right of passage for an author. It’s important for sales too and getting your name and book known, especially for a debut book. Who knew if my book would even be still out there what turned out to be months later? 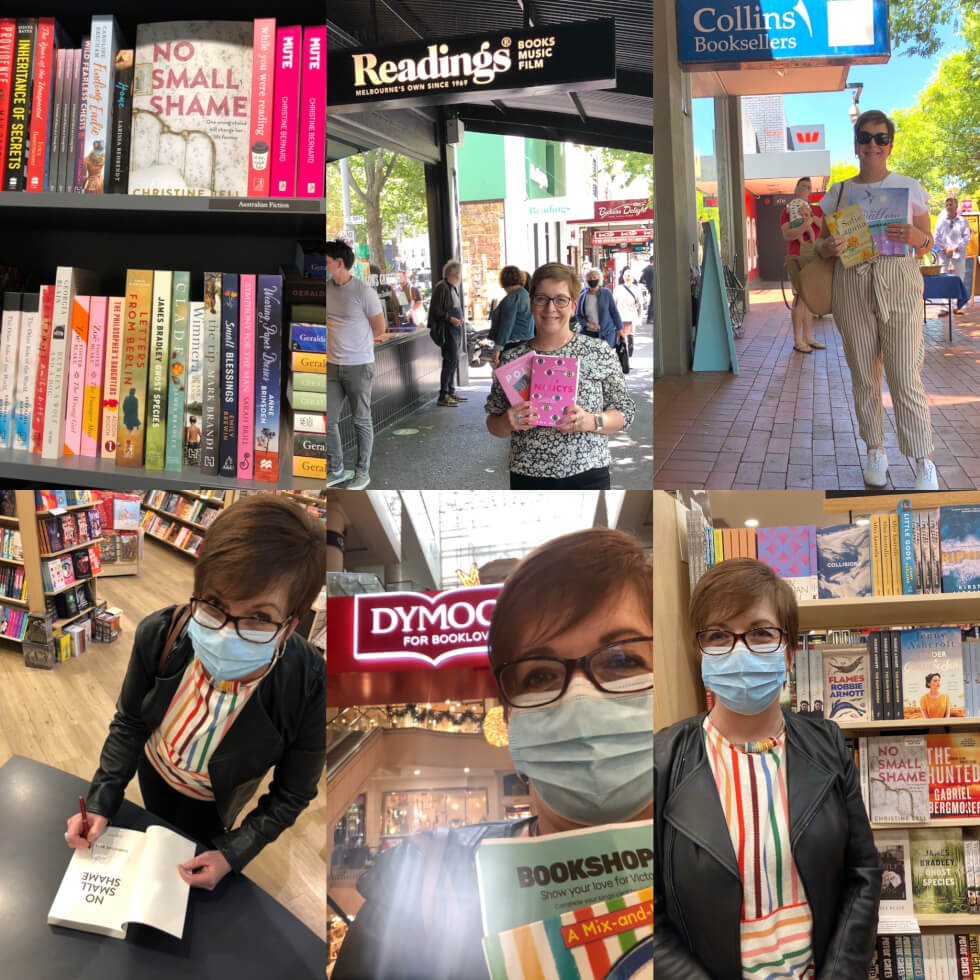 There were so many new releases in that last quarter of 2020 that for awhile I thought I’d missed my chance. But then, along came Victorian Bookshop Bingo created by fellow debut novel author Imbi Neeme. Bookshop Bingo gave authors the chance and excuse to visit multiple bookshops and support their fellow authors by buying books and putting one’s own face in front of booksellers, linking to their own book baby, of course.

An extra bonus of Bookshop Bingo was adding substantially to my TBR pile too. But then, do I ever need an excuse to buy more books? No!

Life for a writer is by nature spent in isolation much of the time, so not a lot changed for me day-to-day during lockdown. But when the second lockdown was announced, with no chance to generate publicity for No Small Shame, I knew I could not waste the enforced weeks at home and vowed to finish a second draft of my WIP by the end of it. The extra weeks that ultimately extended that lockdown helped my cause, if not my mood. But the determination to achieve something positive, along with twice weekly story times with my 8-year-old grandson and frequent Zooms with my family kept my headspace in a good place for the duration.

Like most people in Melbourne, I ate and drank too much, using lockdown as an excuse for over-indulgence. Am I sorry? Not one bit. Mental well-being is far more important than adding a few kilos, though, I am determined to exercise better self-control in 2021! 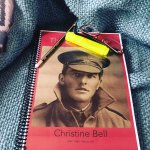 This is a long post, I’m sorry, but really it’s a wrap up as much for my own benefit. I needed to write about it in order to move into a brighter New Year and writing gear. A year that is already starting with promise as I’ve just finished Draft 3 of my work-in-progress.